Any Android device is bundled with a series of basic applications. We can see for example the Phone app, the SMS app, the Contacts app or some of the many services offered by Google itself, like Gmail, Google Maps, and even the Play Store. On the other hand, we have some apps that work in the background. We don’t usually see them but, they take care of very important tasks in our device.

The mastermind behind the curtain and the most important app is called Google Play Services. It’s always there in the background, managing various tasks and keeping everything under control and working well. You could consider it the elementary pillar that unites a lot of apps and services. This app must be constantly updated so it can keep doing its work as it should. If you don’t know how to do it, we’ll explain how to update Google Play Services to latest version and show you an alternative installation method using an APK in case the app isn’t being updated by default.

What is Google Play Services and What Does It Do?

Google Play Services keeps an order between the different versions of Android so no user is left behind function-wise.

Using Google Play Services has numerous benefits for both users and app developers. For us as consumers, it means that we can enjoy lots of features without having to rely on the OTA updates distributed by each device manufacturer. We still have to consider that this doesn’t mean that we can update everything, but it will work for the essential apps.
For the developers using Google Play Services, it means that they won’t have to invest excessive time and effort re-uploading their apps every time Google changes something, and the apps will continue working without issues.

Today, Google Play Services app update is the key for any Android device to not become obsolete every time one of your apps updates, so how do i update google play services? Just follow the steps we shown below.

How to Update Google Play Services 2019

Google Play Services is located within the Google Play app but unlike other apps, it updates itself, and we usually don’t need to check updates for google play services if the latest version is installed or not. It usually updates itself and it’s very unlikely that it isn’t, but if that’s the case, don’t worry – we have a solution for that.

If you look for “Google Play Services” in the Google Play app, it should appear in the store as the first result. Follow these steps to get latest version of google play services:

1- Open Google Play and search for “Google Play Services” , or just click on the badge given below.

2-  This will take you to the app’s page, there if you see a button labeled as “Update”, just tap it and wait for the download and installation to finish. 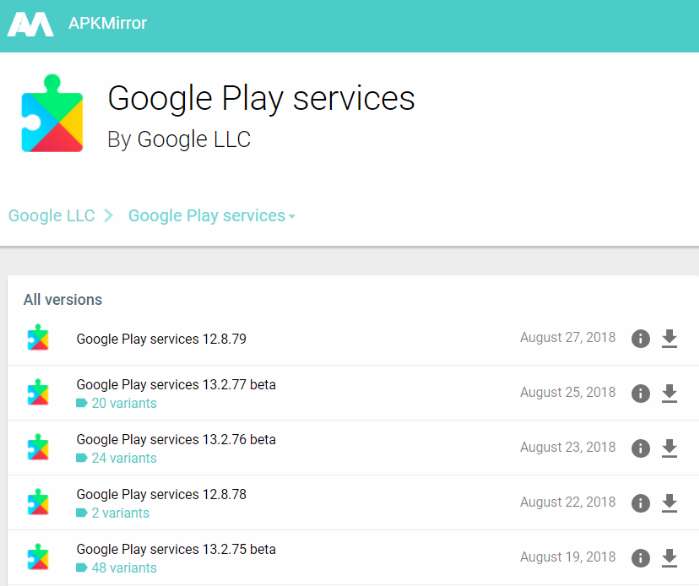 If the application isn’t up to date, you will see a button telling you to update. When you click on it, in just a matter of seconds Google Play Services will be downloaded and installed in your device. As you can see, it’s really easy and it isn’t rocket science so if you notice an app that depends on Google not working well, the problem is probably solved doing this.

What If My Android Device Doesn’t Have Google Play Services Installed?

It may be the case that our device didn’t come with the Google Play Services bundle. Usually, device manufacturers have to pay a fee to Google to include Google Apps in their devices, but there are those who prefer to do not and use alternative app bundles for various reasons. A lot of Chinese manufacturers do this.

If we have a device from any major company, we won’t have to worry about that because Google Play Services will come pre-installed as default, but if we bought a cheap device from a Chinese company or some other unknown brand, it probably won’t come bundled with Google Apps.

If we buy a smartphone from a small Chinese brand, it probably won’t come with Google Play Services pre-installed.

Fortunately, there are several websites that work as repositories for Android apps. They are responsible for uploading copies of the free apps that are on Google Play as APK files. APKMirror is the most known website and one of the most reliable. Since Google Play Services is free, there is a copy of the app on that page available as an APK file, and we can download it:

After downloading and installing Google play store & Google play services update apk, we can now connect our Google account on our phone and start downloading all the Google apps from the official store without any problems. Although there are manufacturers that prefer to work without them, its possible to download them anyway and configure everything the same way if you need to do it, and everything will work without any problems.

If you followed both methods given above but still face problems google play services won’t update?, don’t worry. Just follow these steps to fix them.

Disable Google Play Services. This will delete the installed version and leave the version that was installed on your phone when you bought it. After that, just update it again.

1- In your phone menu, open the Settings tab and go to Applications. Tap on the three vertical dots located on the top right corner of your screen and go to Show system apps. Select Google Play Services and tap on Disable. If your phone doesn’t allow you to disable the app, deactivate Device manager. Go to Settings again. In Security, enter Device administrators and deactivate Android Device Manager.

If you are android 7.0 or above, don’t disable the app it will only deactivate the app temporarily. We need to uninstall the updates. To do this once you are in the app info page “Tap on the three vertical dots” > “Uninstall updates”.

Then, do this to enable the app:

2- Repeat the first steps again until you’re on Google Play Services, and tap on Enable.
And lastly, to update it:

3- Locate Google Play Services using the search feature on your device. You will be directed to the Play Store page of the app – once you’re there, tap on the Update button.

To read more articles like google play services update, we recommend you to enter your tips and tricks section.

How to Work with Workspaces in Gnome

How to Turn Your Raspberry Pi into a Personal Web Server